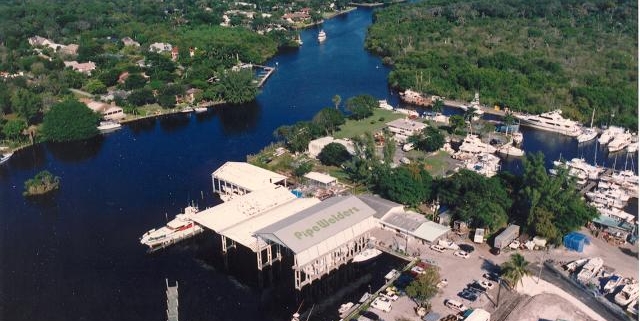 Billfish Marina, family-run since opening in 1956, will have new ownership if all goes according to plan by April. The same owners behind Bradford Marine have an agreement to acquire not just the facility, but its affiliates, too.

Fort Lauderdale Yacht Harbor (FLYH), run by father-and-son team John and Michael Kelly, acquired Bradford Marine last year. Since then, FLYH has been renovating the property, on the New River in Fort Lauderdale. Conveniently, Billfish Marina sits across the river from Bradford Marine. In addition, with a boatyard plus dockage for megayachts to 130 feet (about 40 meters), it has several affiliated companies on site. Specifically, they are Pipewelders Marine, P&R Canvas, and High Seas Technology. All service the yachts that call on the boatyard, plus address service and refit needs worldwide, too.

Trey Irvine, president of Billfish Marina/Pipewelders, says the acquisition will permit growth and raise the bar on customer service. “Continuing family ownership was very important to me,” he says. “John and Michael Kelly are committed to the same high standards that my father and I had building Billfish Marina and our other companies.”

Upon the anticipated close of the deal in April, Irvine will remain as an advisor to the Kellys. In addition, the marina and its affiliates will continue operating under their respective names.

“Bradford Marine and Billfish Marina both have customer-service-focused operating philosophies and complementary strengths,” comments John Kelly, CEO for FLYH. “We are excited to deploy best practices across the two companies.”

Michael Kelly, COO for FLYH, adds that he and his father acquired Bradford Marine in 2019 to be “an integral part of the Fort Lauderdale marine community” and boost the industry’s economic impact. The new acquisition “reinforces our commitment to those stated goals.”